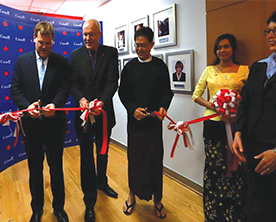 Canada’s Global Market Action Plan (GMAP) has identified Myanmar as a priority market, because the country offers significant opportunities for Canadian businesses in sectors such as infra- structure, information and communications technologies, mining and oil and gas, said Mark McDowell, the first ever Resident Ca- nadian Ambassador to Myanmar.

Canada has officially opened its embassy in Myanmar and has announced Mark Mcdow- ell as its first ever resident Ambassador. The aim is to play a more active role in Myan- mar’s transition and as a key player of devel- oping initiatives around children’s health in the country.

In addition to the development initiatives, the Government of Canada will harness its diplomatic tools under the Global Markets Action Plan, in order to achieve commercial success for Canadian businesses in Myan- mar, with a particular emphasis on growing Canada’s SME footprint .

According to the foreign minister John Baird, who officially opened the Embassy, Canadian government is hoping to bring strengths in areas such as finance, energy, mining and agriculture. The Global Markets Action Plan of Canada will support the pursuit of com- mercial success by Canadian companies and investors in key foreign markets and will generate new jobs and new opportunities for workers in Myanmar.

While trade between Canada and Myanmar is currently very low, it is growing rapidly. Bilateral trade between Canada and Myan- mar last year was almost $17 million (CAD), up almost 3.5 times from 2012. This is only the beginning and the potential to increase trade is very high. In addition, Canada has a distinct advantage in Myanmar because Canadian Businesses bring robust corporate social responsibility, expertise in financial services, energy, mining, and agricul- ture.

Ambassador Mark McDowell said “Eco- nomic reform mean- while, holds the promise of releasing the untapped potential of this country and its people, and to raise living standards for a population that has suffered significant hardships over the past decades. We can contribute by promoting Canadian business- es who will bring world class technologies and skills, corporate social responsibility, and by helping to build an economic envi- ronment conducive to innovation and sus- tainable growth.”

The Ambassador Mark Macdowell presented his credentials to President U Thein Sein on August 14 .

The iconic Yangon Children’s Hospital was built by Canada in the 1970s. Prior to that Canadians were assisting Myanmar to devel- op its health, transportation, and resource sectors. Canadian businesses were active in Rangoon (Yangon) as far back as the 1890s. Now Canada is back, and they are looking forward to be part of this exciting time in Myanmar’s history.

Canada welcomes recent reforms and supports a peaceful transition in Myanmar that respects human rights, democracy, and the rule of law. The Government of Canada stands ready to support Myanmar as it contin- ues down its path towards democracy.

Foreign Affairs Minister John Baird an- nounced Canada’s plans to open an em- bassy in Myanmar over two years ago. The announcement was made during the Asso- ciation of Southeast Asian Nations (ASEAN) Regional Forum and Post Ministerial Con- ference, where Baird met with his ASEAN counterparts, including Myanmar Foreign Minister Wunna Maung Lwin in July 2012.

In April 24, 2012, Canada announced sig- nificant changes to its economic sanctions against Myanmar, suspending most of the prohibitions on trade and investment. Myanmar currently has an embassy in Canada.

“Although the Myanmar government has taken positive steps to improve human rights and democracy over the last year, we continue to urge more progress on reforms,” said Baird. “Canada stands ready to assist the Myanmar government in any capacity to build on the democratic fundamentals, and the freedom and rights of their people.”

On March 8, 2012, Minister Baird made a landmark visit to Myanmar, marking the first official visit to that country by a Cana- dian foreign minister. During his visit, he delivered a certificate recognizing Aung San Suu Kyi’s honourary Canadian citizenship, which was conferred upon her by the Parlia- ment of Canada in 2007.

Canada’s Trade Commissioner Service in Yangon will ensure that Canadian businesses will have a dedicated service on the ground to help them navigate through the local busi- ness culture, regulatory environment, assess risks and ensure that local partners in the market are responsible business partners. This long term investment signals that Can- ada stands ready to play a significant role in helping the people of Myanmar secure a freer and more prosperous future.

Through the Trade Commissioner Service, local companies are also able to source Ca- nadian companies that can supply them with goods, services and technologies they need.

The Government of Canada will contribute $50,000 to the Beyond Ceasefires Initiative, a project which supports both the Govern- ment of Myanmar and ethnic groups. This contribution is symbolic of Canada’s desire to aid the government and ethnic groups in moving from ceasefires to lasting peace.

The project will be implemented as a series of symposiums, public expert interactions, pri- vate meetings and related activities designed to bring outside experience and expertise to the Myanmar peace process.

This initiative will also contribute to stimu- lating an informed public debate on issues central to the peace process and will con- tribute to longer-term, sustainable peace in Myanmar.

The Government of Canada will contribute $50,000 to the Open Myanmar Initiative (OMI), which promotes the right to informa- tion, engages citizens in the parliamentary process and supports former political pris- oners.

OMI’s e-government initiative will make information on Myanmar’s parliament and parliamentarians more accessible to citizens through mobile applications in the lead-up to the 2015 elections. The initiative will contribute to increasing civic awareness and government account- ability and will play a role in preparing the next generation of Myanmar leaders for their civic duties.

The Government of Canada will also be con- tributing $10,000 to support PEN Myanmar in its work both to promote freedom of ex- pression and to make citizens more aware of speech that can incite intolerance.

This project will help PEN Myanmar to mon- itor the newly free media and draw attention to any instances in which the media exacer- bates tension and conflict; this is in order to counter hate speech and promote unbiased reporting. It will also help PEN Myanmar to conduct public education sessions to raise awareness among the Myanmar people on the importance of critical analysis and how to approach a newly free media.

The Government of Canada will continue to support lesbian, gay, bisexual and transgen- der (LGBT) rights in Myanmar by providing $10,000 to Equality Myanmar and Colours Myanmar to fund a series of public education and legal awareness events this year.

These organizations continue to raise aware- ness among the Myanmar regarding human rights for all members of society, including the LGBT community. 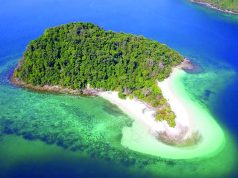 Visiting the Tsukiji of Myanmar