Home Insider THE COST OF POVERTY

The reality of poverty in Myanmar

Compared with other ASEAN member countries, Myanmar is ranked among those with high percentage of poor population. Except for the Philippines, the other top four are neighboring countries located in the Asia mainland.

Globally, poverty is generally measured through country national poverty lines, most of whom pegged the daily income of the poor as those below the $1.25 level. There may be variations in the other indi- cators used but the amount became the benchmark for poverty threshold.

The specter of poverty

Poverty as a multi-faceted phenomenon can be viewed from different perspectives. Its causes cannot be attributed to one specif- ic factor, but a web of several complex and inter-related factors. For a start, we look at some basic but very important indicators like population, income, health and education to have a glimpse of poverty in Myanmar.

The population of the country was pegged by the recently concluded census at 51.4 million. Although there were concerns that a big portion of the people were not includ- ed in the count and thus the number is un- derstated, population growth and migration to the urban areas is a phenomenon that can hardly be prevented. It is estimated at present that 29% of the people are living in the country’s urban areas. The continuous increase in the urban population as a result of migration will stretch basic services to its limits, and the inability of the physical infrastructure to cope with the influx of op- portunity-seekers from the rural areas will spawn problems. Slum areas with limited or worse with no basic utilities will emerge as migrants look for cheap places to stay. Overcrowded small houses, limited water supply, on-and-off electricity, traffic jams are but some of the urban problems that will be experienced.

Income opportunities is one of the main motivations that will drive migration to the cities and industrial estates. But current monthly incomes are not enough for the standard of living of ordinary household. According to a recent survey on the cost of living, a family of 5 needs 627,150 Kyats a month to have a decent life. This cannot be attained by an ordinary employee receiving average salary of $110 a month, nor a gar- ments worker receiving $30-35 a month, much more a seasonal farm worker receiv- ing 3,500 Kyats per day.

Increased economic activities are becoming visible with the inflow of foreign direct in- vestments that provides opportunities for employment to Myanmar citizens. Howev- er, most of the available positions may only

be for factory workers and manual labor- ers. Positions that are technical and highly skilled in nature may not still be available to most Myanmar citizens. The present human resource pool of Myanmar has very limited number of people for highly technical and higher management level. The local enter- prises, most of whom can be described as small and medium has also limited capacity to absorb new graduates and highly techni- cal staff.

The present labor force is estimated to be 70% involved in the agriculture sector. The picture in the rural area is also not encour- aging as the sector has been neglected and has problems in productivity. In general, the agricultural sector has to upgrade to be able to enhance its productivity. Recent news of the MADB filing collection cases against 15,000 farmers in the Delta region is a manifestation of the problems related to agricultural financing and as such push more people out of the sector.

In the field of education, the rate of literacy is high, but the functional skills of critical think- ing and those needed by businesses and in- dustries need more improvement. The qual- ity of education has to be upgraded to align with international standards and the need of the market. To demonstrate the disparity, one MBA student observed that the concepts and practices taught in the business schools are, “horrifyingly destructive when applied to Myanmar situation”. Indeed local business practices have to be in harmony with global standards or it will not have sustainable busi- ness relationship with global companies. Health is where most of the people are vul- nerable as the basic services have still to be made available to most of the people, espe- cially maternal and child health. The main cause of mortality is still communicable dis- eases: Malaria and TB are among the main causes. The recorded 189,000 HIV cases and estimated 15,000 deaths are quite high. Malnutrition remains to be a basic health concern, and according to UNICEF, Myan- mar has the 3rd highest malnutrition rate in South East Asia.

The incalculable cost of poverty

Generally, we cannot quantify the cost of poverty and its attributes. We can only de- scribe the negative impact it has on the indi- vidual and to the society as a whole.

From the economic perspective, exclusion from the market economy is the most disem- powering. Without the necessary resources, access to support facilities and institutions, the poor are shunned from meaningfully participating and as such are also exclud- ed from reaping the benefits of the market economy. This condition further sends the poor to the fringes of the society as his ca pacity to earn income is diminished. This may not only affect the poor but their de- scendants as well. As such, poverty allevia- tion measures will also require generations to attain positive results.

Relative to this, the government will have to manage the financial cost of providing basic social services to the poor. It will not only be the problem of the government as it will also involve the initiatives of non-govern- ment organizations and business sector to implement programs that will help the poor cope with poverty. Coping with poverty is one aspect, pursuing poverty reduction pro- gram is another aspect. This does not only need financing but a comprehensive and multi-dimensional approach.

From the social perspective, poverty breeds other social issues like criminality and vi- olence especially among women and chil- dren. Abuse and exploitation of the poor also becomes rampant as they are trafficked and traded and sold as modern-day slaves. Family disintegration also occurs as mem- bers leave the family to seek for opportu- nities elsewhere. Weakening of the family further leads to more problems as children lost their moral compass which may result to juvenile delinquency and worse drug ad- diction, gangster mentality and sexual pro- miscuity.

Political stability will be a problem as the concerns of the poor will be used as issues against the government. Poverty issues are always used as ammunitions during political exercises like elections. Some poor are more prone to exploitation and manipulation by unscrupulous politicians. In most cases, in- surgency also gains foothold in areas where poverty is rampant.

Being the largest country in South-East Asia in terms of land area, with rich natu- ral resources, Myanmar should have less or shall we say no poor people. It is therefore imperative that poverty reduction initia- tives should be among the priorities of the government. It is for the better interest of whoever is in power to work towards eradi- cating poverty and ensuring the people are enjoying the benefits of a modern and pros- perous society. 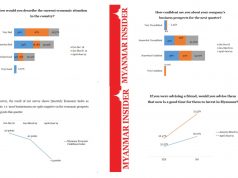 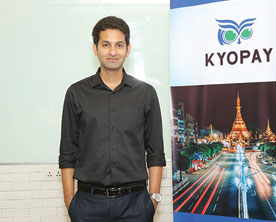 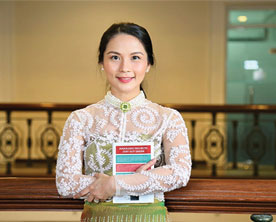 “Myanmar Is A Nation of Small Farmers”